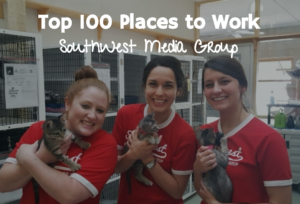 The Dallas Morning News says more than 300 large, mid-size and small companies were nominated, and nearly 100,000 employees participated in the survey, which has been conducted annually for the past eight years. Employees rate their companies in areas including pay and benefits, management, work/life balance, execution and direction.

SMG was one of 35 small companies recognized from among nearly 150 businesses that participated in the 50-to-149-employee category, the survey’s largest. Culture was a key factor for winners – the report quoted one SMG employee as saying, “I get to be a part of a team of people who dream big and work hard to achieve it.”

The report cited the SMG Gives Impact Week, which gives employees the opportunity to volunteer during their workday at three local charities, such as Operation Kindness. Also noted was SMG’s environment of fun and creativity, demonstrated by the company’s employee caricature wall in the lobby and occasional office Nerf gun wars.

“At Southwest Media Group, we know that culture matters – it is a driver of creativity, innovation, collaboration and success, and we work hard to preserve it,” said Southwest Media Group Chief Digital Officer Eric Schaefer. “Being named one of the ‘Top 100 Places to Work’ in Dallas for a fourth year reflects how we encourage our team, without fear of failure, to test, learn and adapt their media planning and buying strategies to lead our clients to positive business returns. It also shows why we hold onto our clients and employees much longer than the industry average.”

The award caps off an exceptional growth period for the agency. It has nearly doubled in size over the past two years, adding new clients that include W.M. Barr, Del Frisco’s Restaurant Group, Savers Thrift Store, World Vision, Poo~Pourri and Walls Outdoor Goods.