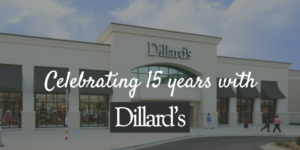 “Dillard’s has been a great partner and I am particularly proud of the length of the relationship because it confirms the value we are providing to them in the advertising and media marketplace,” said Bob Nichol, Founder and CEO of Southwest Media Group.

The agency is known for maintaining long-term client relationships, but 15-years stands out when the industry average client relationship lasts about three years. When Dillard’s joined the agency client roster in 2001, it grew the size of the agency by almost 50%. It also was the first of many retail clients for the media agency that specializes in retail and restaurant clients.

About Southwest Media Group
Southwest Media Group is a nationally known independent media service agency that provides strategic planning, buying and digital and marketing services. They were recognized by the Dallas Morning News as one of its “Top 100 Places to Work” in 2012, 2013 and 2014. The agency’s clients include Dillard’s, Dave & Buster’s, Savers, At Home and Half Price Books.